skip to main | skip to sidebar

If you are stuck with using WordPress, sometimes smallest things can make a huge difference:

This is because many plugins and other crap uses a meta_value as a store for datetimes etc. That is very slow to sort without.

One page went from loading 27 seconds, to whopping two seconds. Which is still slow, but bearable with cache in front.
Posted by Ciantic at 4:39 AM No comments:

Inject a function (instead of DLL) to target process in Windows

When I was doing my Disable Flashing Taskbar Buttons patch to explorer.exe first I did it by injecting AutoHotkey.dll inside explorer.exe and patched it this way.

Since the only thing I needed was a call GetWindowLongPtrW to get the task switcher memory location, I started to look a better way.

Turns out it's quiet simple.

CreateRemoteThread is the function (usually?) used to inject a DLL by making target process to run LoadLibrary, but instead you can of course use it to run arbitrary assembly since it takes address.

Only trick is to turn your function (in my case call to GetWindowLongPtrW) to function call that takes single argument.

I made a little C program for this:

myInjectFunction is the function to be injected, above code must be compiled by disabling inlining. If you run it through disassembler e.g. "dumpbin /disasm /all yourprogram.exe" you should get something like:

The call to GetWindowLongPtrW must be in longer form:

You can try out changing the assembly runtime with x64dbg until it works.

In this demonstration I won't fill the 8 byte (XX) address because you have to determine it runtime by calling GetProcAddress and then transforming it to reversed hexadecimal form.

After this one simply writes the bytes using WriteProcessMemory and calls CreateRemoteThread with newly created memory address and it just works just like the C equivalent did.

Now my script was dependency free, pure AHK script.
Posted by Ciantic at 1:27 AM No comments:

I've waited for a long time so that Microsoft introduces virtual desktops. I used third party programs, mostly VirtuaWin and mdesk (which source code I happened to have.)

Yet when Windows 10 introduced the virtual desktops, they screwed one part that was about to drive me crazy: Flashing task bar buttons shows up in all virtual desktops, and annoys the hell out of you when working on different desktop.

This couldn't go on. I had to find way to prevent this.

Disassembling user32.dll with simple (dumpbin /all /asm), and patching the FlashWindow(Ex) to do nothing. Would have worked just fine and was easy to do, except that you don't patch user32.dll on this day and age, too many anti-malware tools will scream at you.

First I had to find out the message which caused the FlashWindowEx message to be run. Hatched up  a small program that flashes the task bar button after a timeout. Then a tool here I used is Spy++ (64bit). Only trick is to go upwards the tree, where SHELLHOOK is first posted:

Above was the simple part for me, I had used Spy++ many times.

Next came a part that I've not had a need to do, debugging a explorer.exe. Tool I found was x64dbg, excellent tool, yet really confusing if you've not done debugging in assembly level ever, or for a short period of time long time ago. Last time I dabbled on assembly level debugging was with SoftICE, and that was discontinued in 2000! (Though I probably tried it somewhere after 2000, it was usable long after)

First I thought I just flash the button and keep stepping the explorer.exe and find miraculously the piece of code. Turns out the explorer.exe has a lot of threads, and x64dbg does not have tracing capability (yet), so that was no go.

I tried hitting C02B in the pattern search, for no avail.

I knew how windows message handling works, so I knew there had to be WndProc somewhere in task switcher, if I could just find the damn thing. After banging my head, I decided to open a question StackExchange Reverse Engineering of how to find WndProc in x64dbg? Got a really helpful and comprehensive answer from blabb.

You have to call from within the program you debug a user32.GetWindowLongPtrW(hwnd, GWLP_WNDPROC) where hwnd I already knew, from Spy++.

Blabb knew how to write a script to do so, the x64dbg has no documentation, it inherits scripting features apparently from other debuggers like ollydbg. I couldn't have written the script commands, assembly I knew though.


(You can of course write to any position in the memory just by double clicking and typing asm, it's a bit faster way sometimes if re-usability is not an issue.)

Now if you run this script, it does nothing. Nothing really happens on your screen, it does not change register etc. It just writes the commands in newly allocated address in memory you find from status bar: 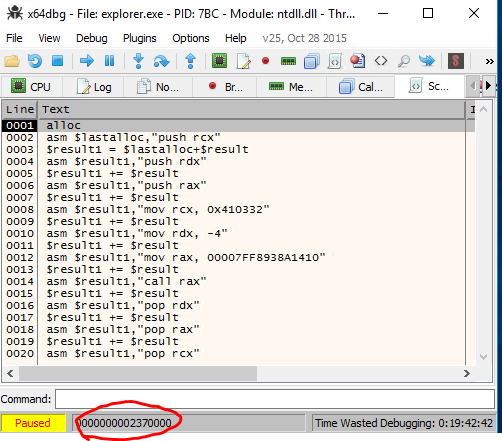 Now you go to this address (Ctrl+G) and you find the code inserted in there: 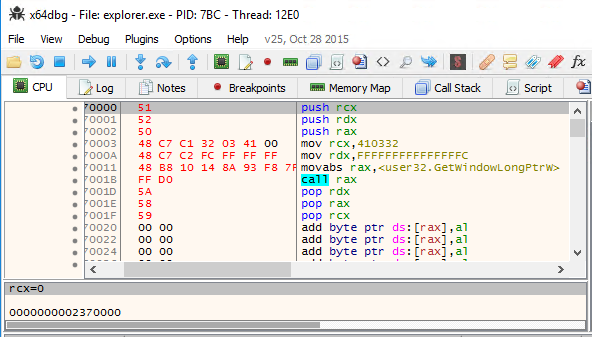 You move the RIP to there and set breakpoint somewhere after call rax, and before you pop the RAX. The address of WndProc is in the RAX. In my case it was: 00007FF6361C9880. You can verify this also restarting the instance and running it again, it should give same address even if you restart the instance, but not when you restart the computer or virtual machine apparently.

Now that I had my magical address, I could finally (!) see also the message if I triggered the FlashWindowEx and set the breakpoint there: 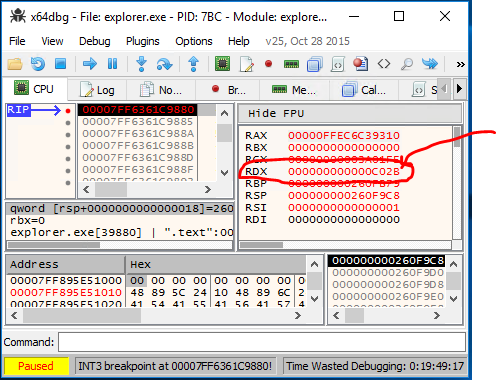 I just simply zero the RDX register when 0xC02B (SHELLHOOK) and wParam 0x8006 (HSHELL_FLASH) appears in the registers and BOOM! Flashing task bar buttons does not appear, amazing! First time I managed to get it ignore it.

I knew zeroing the message (RDX) would be relatively safe (as long as I zero it out only on 0xC02B and when wParam is HSHELL_FLASH) because all WndProcs are just dummy switch cases on messages that falls back on DefaultProc.

Armed with this knowledge I could write a live patch using x64dbg to demonstrate and test the patch before writing a program that patches the explorer.exe.

I replaced one two byte instructinon (push r14) with a short jump and jumped upwards: (Here is two jumps I've added, one in the middle of WndProc (red one), and upper one in with green dot in front) 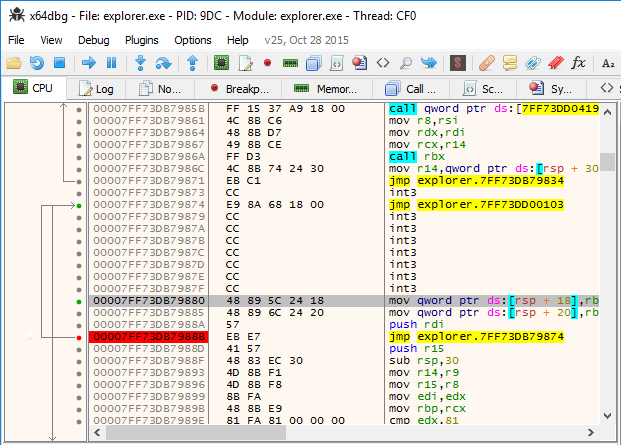 Then I added my logic for emptying RCX, when C02B and 0x8006 appears in register. This I threw at the bottom of the module since I could not find space from above:

"Push r14" is the instruction I replaced in the WndProc, so I had to run that before returning to it.

And now I had perfectly running explorer.exe, without flashing task bar buttons feature.

Get the final patch as AutoHotkey script from GitHub: DisableFlashingTaskbarButtons I tested it with Windows 10, builds 10565 and 10240. It's written on AutoHotkey and can be used without further dependencies.
Posted by Ciantic at 1:12 PM No comments:

ImageMagick: Save for web (JPG)

Okay this is required in all web applications that allows people to upload images for viewing in browser:

Notice that in above input.jpg need not to be jpg, it can be BMP/PNG... any format that imagemagick reads, it's perfect way to convert anything user uploads to the JPG.

I got a gaping wound as group of users had managed to upload bunch of JPG images with CMYK profiles! As a programmer it would be far easier if there were command like convertweb or something that would just converted any image to PNG or JPG that just works in browsers.
Posted by Ciantic at 6:41 AM No comments:

Scala cast if possible when getting from Map

Stolen from Preishablepress
Posted by Ciantic at 2:41 AM No comments:

Copy & Pasted from http://pixelsvsbytes.com/blog/2011/09/sticky-footers-the-flexible-way/ Page was down for me, so salvaged this from Bing search cache (Google cache didn't have):

Step 3: All we have to do now is to put our CSS and HTML code together. Fortunately we can use the body element as .Frame, so there is no need for an extra div tag or so.

Note: Remember to include the html5shiv workaround in your page (and define appropriate CSS styles) if you want to use HTML5 tags in IE8 and below. Or simply use div tags instead of header, section and footer.

A word on older browsers

The code above will work even with older versions of Firefox, Opera and Safari, so there is nothing to worry about here, but unfortunately Internet Explorer 7 and below don’t know anything about display:table or display:table-row, so we go the way of graceful degradation here.

The first thing we have to to is, to prevent the margins of elements inside the row from being outside of it, by adding overflow:hidden to the .Row style.

That gives us quite acceptable results, but the footer will always be outside of the window due to the 100% height of the .Frame and the .Row. The solution is to set height:100% in a way that all Internet Explorer versions below 8 won’t recognize. I’m using the (valid) html>/**/body CSS hack to accomplish this, but you might also use conditional comments if you feel better that way. However, here is the fixed CSS:

I guess it shouldn’t be too complicated to create a sticky footer by adjusting the height of .Row.Expand with some little Javascript.